Tata Motors bags orders for over 5,000 buses from STU’s, across India 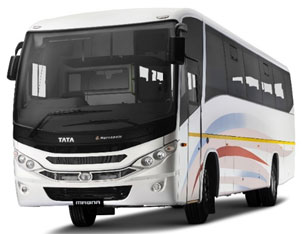 Tata Motors, the country’s largest commercial vehicles manufacturer, today announced having received orders of over 5,000 buses from 25 State / City Transport Undertakings across the country. This represents a healthy growth of over 80% plus compared to last year in the order book position for Tata Motors. The big surge in STU (State Transport Undertakings) buying across, is being witnessed after a gap of nearly four years, indicating renewed focus of various State Governments / City Transport providers on public transport.

To BETTER COMMUTER SAFETY AND CONNECTIVITY, some of the orders require a fully IT enabled bus, to ensure trackability and traceability –

To ensure BETTER PASSENGER COMFORT & SAFETY, some of these buses are built with features like –

Over 1500 of the ordered buses will be fully built and integrated with these features, at Tata Motors JV manufacturing facility at Tata Marcopolo (Dharwad & Lucknow) and ACGL Goa.

Mr. Ravi Pisharody, Executive Director, Commercial Vehicle Business Unit, Tata Motors Ltd., said, “With these orders, we at Tata Motors take great pride in partnering with various STU’s, in delivering world-class solutions and to create and maintain a sus­tainable mass public transportation system. We are encouraged by the adoption of latest technologies by these STU’s, for fleet modernization, lower total operating costs and expanding user base & ridership. We welcome the collaborative approach employed by these STU’s in bettering end user needs, which will further help boost our efforts towards innovations in the public transport space.”

Mr. Sandeep Kumar, Business Head (Commercial Vehicles – Passenger), Tata Motors Ltd. said, “Early investments in passenger transportation capabilities and technologies, enables us at Tata Motors to play a leading role in providing fully integrated transport solutions, in one of the world’s largest bus markets. With an extensive portfolio, we are geared up to provide a ‘Win-Win’ for both the operators and commuters of today and tomorrow. Having said that, we have nearly doubled our order book in FY16-17 already and are adequately prepared to cater to the current and future demand coming in for our buses.”

Mr. Pisharody further went on to add “Tata Motors plans to execute all these orders in the financial year 2016-17. The orders will definitely enable us to further strengthen our leadership position in the CV Passenger space.

Tata Motors has also developed Electric Hybrid buses and Articulated buses to meet the future transport needs for ‘Envisaged Smart Cities’, both of which will soon be seen on Indian roads.

Tata Motors is one the country’s largest bus manufacturers, with the most comprehensive range of public transport vehicles that meets every needs – from last mile to intra city / intercity, school, tourist application etc. It has continued to be a leader in this segment not just by setting technological benchmarks, but by adapting innovations effectively to suit Indian travel conditions.

Tata Motors Limited is India’s largest automobile company, with consolidated revenues of INR 2, 75, 561 crores (USD 41.6 billion) in 2015-16. Through subsidiaries and associate companies, Tata Motors has operations in the UK, South Korea, Thailand, South Africa and Indonesia. Among them is Jaguar Land Rover, the business comprising the two iconic British brands. It also has an industrial joint venture with Fiat in India.  With over 9 million Tata vehicles plying in India, Tata Motors is the country’s market leader in commercial vehicles and among the top in passenger vehicles. Tata cars, buses and trucks are being marketed in several countries in Europe, Africa, the Middle East, South Asia, South East Asia, South America, Australia, CIS and Russia.

Tatamotors14 February, 2018
You favourite #LevelNex rockstars p a r i k r a m a will play LIVE soon from the TATA pavillion Hall No. 14, 3 PM onward during #AutoExpo2018. Keep #RollingWithNexon, only on twitter, to know more. Rolling Stone India http://bit.ly/2EpMoqI

Tatamotors14 February, 2018
A rocking #LevelNex Valentine's Day indeed! Watch Parikrama perform LIVE at 3 PM at the Tata Pavillion Hall no. 14 during the #AutoExpo2018. Keep #RollingWithNexon to know more! Exclusively on Twitter. http://bit.ly/2F3Jysw
#LoveForYodha We asked ladies "What qualities of #TataYodha would they like to see in their Valentine?" We got a fe… https://t.co/hrSbY726IC
@Tatamotors14 February, 2018

Tatamotors14 February, 2018
#LoveForYodha We asked ladies "What qualities of #TataYodha would they like to see in their Valentine?" We got a few reactions from guys too! #AutoExpo2018 #ValentinesDay

Tatamotors13 February, 2018
We got some amazing entries from you all for #TrucksAreCool! Here are the ones we absolutely loved. #AutoExpo2018 #ConnectingAspirations

Tatamotors13 February, 2018
Second last day to get the #LevelNex experience of the Tata Nexon. Now on display at the #AutoExpo2018

Tatamotors13 February, 2018
Tiago EV and Tigor EV's Harman™ infotainment system, with 8 speakers, ensures you're grooving all the way to your destination. #ItsFantastico #TigorStyleBack